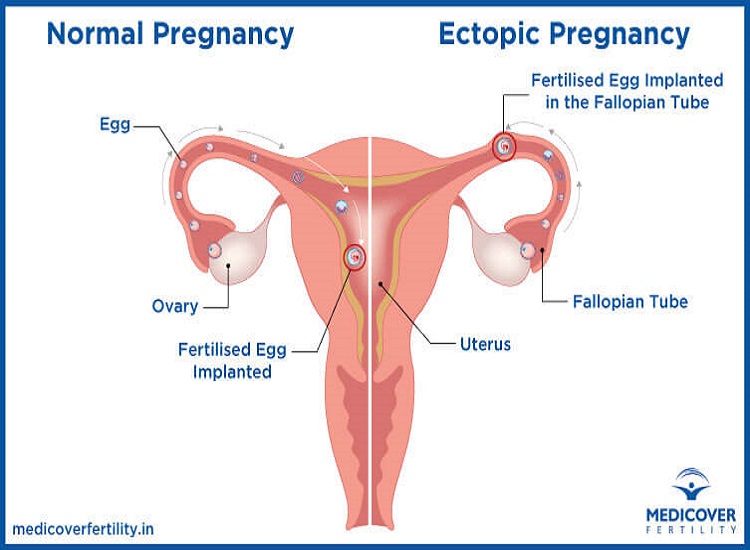 This is a fairly rare event. It means that the fertilized egg fails to reach the womb on its journey from the ovary (from which it was released).

Instead, it settled at some part along the course of the Fallopian tube (sometimes called the oviduct). This odd occurrence seems more common in underdeveloped lands, where about one pregnancy in 150 ends up this way. In Western lands, the incidence is much lower, being about once in every 250 pregnancies.

The tubes are designed as pipes to transport the egg. They are certainly not meant to sustain fetal growth, and it is quite impossible for a pregnancy to continue there for any length of time.

So, symptoms of disaster are inevitable. It is merely a matter of time. Usually, this is between the sixth and tenth weeks.

If the egg becomes implanted in the tube at the ovarian end, then a tubal abortion commonly occurs. This may be the least dramatic. The fertilized ovum simply dies and is spontaneously aborted into the abdominal cavity.

If the egg is located more deeply along the tract of the tube, it increases in size, and gradually burrows into surrounding tissues. Often a major blood-vessel is finally eroded, and a sudden internal hemorrhage occurs. Blood may suddenly spread out into the pelvic cavity, often creating an emergency situation.

If this complication arises suddenly, and there is considerable blood loss, the patient will notice sudden severe pain in the lower abdominal area. Sudden collapse is common, and shock may occur due to hemorrhaging. There may be some vaginal bleeding.

Urgent admission to hospital and medical attention is essential. With prompt diagnosis and surgical intervention, results are usually satisfactory.

The key warning to any woman who appears to be in early pregnancy (one or two missed periods) is to seek prompt attention if there is any sudden onset of low abdominal pain. Call the doctor or get to a hospital.

In recent years, certain procedures have been claimed to increase the risk of tubal pregnancy. The use of the progestogen-only contraceptive pill (the so-called “mini-pill”) had this charge leveled it at one stage.

Operations aimed at reconstituting the patency of blocked Fallopian tubes were claimed to be followed by an increased risk of ectopics.

One ectopic seems to increase the risk of another if a further pregnancy takes place. (The risk rises to about 10 percent.) Only about 60 percent of women who have sustained an ectopic become pregnant again.